8. Skratch and the Accidental Capture 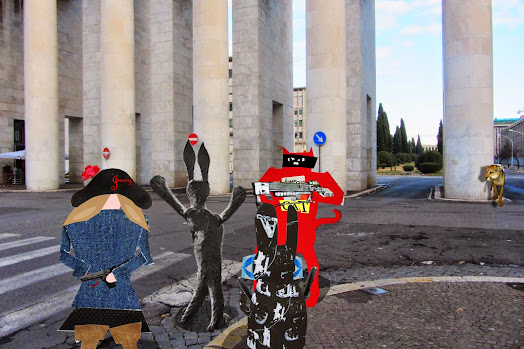 Jenny joined the Coast Team just as dawn broke. Things were getting lively. An Agent who had become detached from his main unit spotted them and they had little option but to capture him. "The Wabbit said no rough stuff!" shouted Wabsworth as Skratch waved the business end of his Snazer gun. "Name, rank and number!" he yelled. The Agent scowled. "Spitlove, 666, Recluta." "I don't believe you," said Skratch and he nodded to Jenny. "I have ways of getting the truth," smiled Jenny and she advanced menacingly. Gently she placed her automatic on the ground and with the tip of her hook she tickled him gently under an armpit. "Oh no, hee hee, aaaaagh!" screamed the Agent. Then he laughed uncontrollably until small pieces of masonry fell from the pillars. Wabsworth nodded assent so Jenny tickled him under the other armpit. "We don't have numbers!" shouted the Agent. Jenny stopped tickling and waited. "You fiends!" screamed the Agent. Jenny waved her hook. "What's your real name?" The Agent growled a deep growl. "That is my real name. Major Spitlove." Wabsworth started to giggle. ""I'll report you!" said Spitlove. Wabsworth rummaged in his coat and drew out a book of forms. "Sign here, here, here and here and also down here," Skratch pushed his Snazer at Spitlove's chest. "Why are you here?" "I've been captured," said Spitlove. "Don't you get all smarty pants with me," said Skratch, "you're not the Wabbit!" "Where is the Wabbit?" asked Spitlove slyly. Skratch pricked up his ears as a deep boom sounded in the distance. "That's for us to know now - and you to find out later."
[Recluta : Private, newly admitted]
at December 22, 2014