3. The Wabbit's team at the Coast 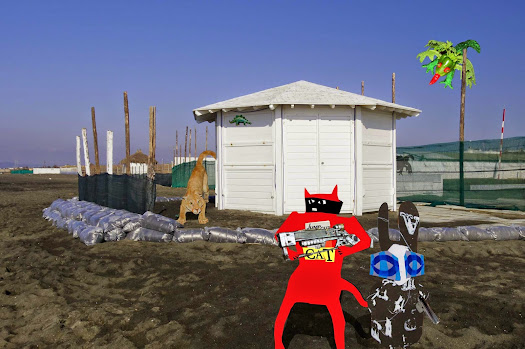 Wabsworth, Skratch the Cat and Puma waited as instructed. "Why are we here?" growled Puma. He fretted impatiently and pawed sand. A flutter of wings announced the arrival of Terni the Food Dragon and they looked up as he wheeled watchfully over deserted beach huts. "The Wabbit said to wait and keep our eyes peeled!" hissed Skratch sharply. But his neck had cricked and he hunched awkwardly. Wabsworth found his automatic was getting heavy and scowled as he shoved it in his fur. "They're taking their time," he grumbled. "So what's in the beach hut?" chirped Puma. "Supplies?" shrugged Wabsworth. "Well I'm bored," purred Puma, "shall we have a look?" "Better not," said Skratch and he thought for a minute. "I know," he murmured. "We'll play a game. I spy with my little eye .." "Something beginning with B," suggested Wabsworth. "Beach hut!" roared Puma. They all became contemplative but Puma broke the silence. "Wabbit supplies in my mind's eye, so what's in the hut?" "Something beginning with A?" offered Wabsworth. "Astrolite G?" suggested Skratch, "the Wabbit did say something about it." "It's usually safe enough," said Puma. "Under what circumstances?" asked Skratch. "Correct storage," said Puma, "such as a beach hut," "Let's relax then," said Skratch with a miaow. "What sounds can you hear?" "I can hear the gentle waves," said Wabsworth. Skratch pricked up his ears. "I can hear a truck."
at December 10, 2014