The Wabbit and the Safe House 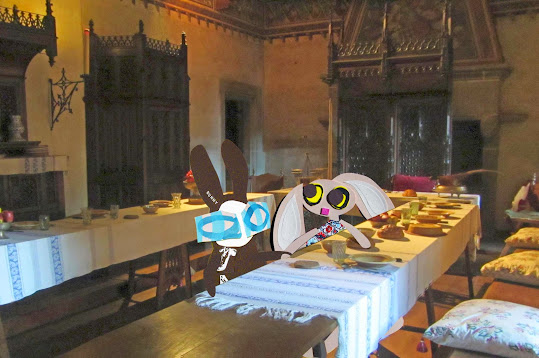 Lapinette felt the touch of the Wabbit's paw and suddenly the Dumpsters and the street were gone. "Where are we?" she breathed. "A Safe House," said the Wabbit. Lapinette looked round. She could hear vague kitchen noises and smelled food. "Was that all a dream?" The Wabbit shook his head. "Not at all. The whole thing is very real." "All these enemies?" asked Lapinette. "It was hard to arrange," said the Wabbit." "But hardly impossible it seems," smiled Lapinette. She curled a paw round the Wabbit's because she knew he was mid-project she and wanted to be supportive. "Can you level with me now?" The Wabbit nodded in a serious manner. "I needed the Agents of Rabit in the open and their attention where I wanted it." Lapinette's eyes narrowed and the Wabbit continued. "The Agents are planning something extremely big." "So the Museum of Enemies was a distraction?" asked Lapinette. Kitchen sounds became louder and they both felt very hungry. "The Museum will open in the New Year as planned," smiled the Wabbit gently. "In the interim, I'm moving the team out." Lapinette felt a sense of excitement. "What do we need?" The Wabbit squeezed Lapinette's paw. "Is your special guard available?" Now Lapinette's smile broke into a broad grin. "Fitzy and Mitzy are, but I don't know about Tipsy." The Wabbit felt things were proceeding well. "Tell them to take the truck." Lapinette asked the question but she already knew the answer. "Take it where?" "Rome," said the Wabbit.
at December 03, 2014