4. The Wabbit and Panico's Dread 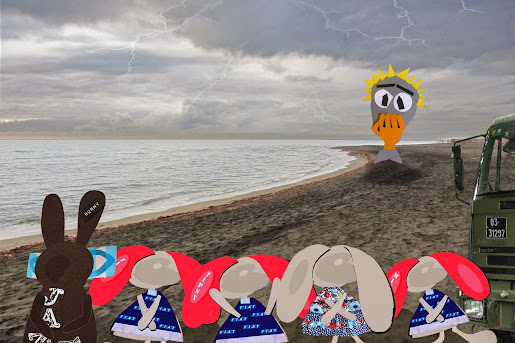 Farther down the coast, the Wabbit, Lapinette and her special guard followed faint moaning sounds. "This could be him," said the Wabbit. He swung open the door of the truck and jumped out to peer into the distance. Lapinette's ears quivered. "He's coming this way." "I have visual," said Tipsy. The creature's moans whipped grains of sand into a storm. As his cries continued they grew louder and transformed into alarm then terror. The Wabbit and his team looked in amazement. "Storm coming," screamed the creature, "I'll be swept out to sea and drowned!" The Wabbit noticed lightning flashes as clouds scuttled crazily across the horizon and a strong wind ruffled his ears. The Wabbit had tuned in to the weather forecast, which clearly specified calm seas, clear skies and no precipitation. So he knew he'd found his target. He inclined slightly towards the creature and nodded as he drew closer. "You intend to eliminate me!" shouted the creature. The Wabbit shook his head but the creature's panic only grew. "Then we'll all be slaughtered." The Wabbit looked questioningly in what he felt was a reassuring manner, but the creature shrank back and his voice was ragged with fear. "They're out to get me!" "Who?" asked the Wabbit. "Now they'll come to get you too!" shrieked the creature. The Wabbit smiled. "After a while, you get used to it."
at December 12, 2014