1. The Wabbit, Fitzy, Mitzy and Tipsy 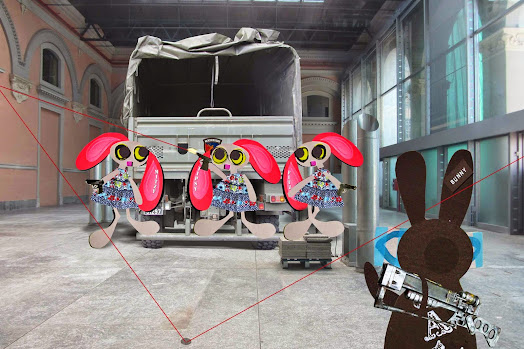 The Wabbit had to meet Lapinette's personal guard and he was a little nervous. Although he had chosen them for the job, Fitzy, Mitzy and Tipsy were loyal to Lapinette - so in terms of rank, things were fuzzy. He approached with caution and waved a paw in greeting. "Oh it's you," said Mitzy, "I suppose you're in charge." The Wabbit grinned. "I suppose I am." Fitzy waved. "I hope you've got something interesting for us!" "Interesting and risky," replied the Wabbit. "Commander Sschr," said Tipsy and she fired a single round from an automatic. The bullet ricocheted twice, darted between the Wabbit's ears and ended its journey by breaking a window. "Tipsy!" said the Wabbit. "You haven't changed a bit." Fitzy was impatient. "What about your Museum of Enemies?" The Wabbit nodded. "It successfully flushed out our arch enemies, the Agents of Rabit." "Golly Gosh," said Fitzy. "Now we'll make them hand in their lunch vouchers." "Ground them for good," said Mitzy. "Ushe 'em as target practice," said Tipsy. Both Fitzy and Mitzy hopped forward to forcibly prevent Tipsy from taking pot shots at anything interesting. "We're going to Rome," said the Wabbit. "Because a creature is causing trouble." "What kind of trouble?" snarled Fitzy. The Wabbit's mouth tightened. "It attracts destruction." Tipsy's laugh echoed round the building. "And now it attracted us."
at December 05, 2014