9. The Wabbit, Panico and the Tower 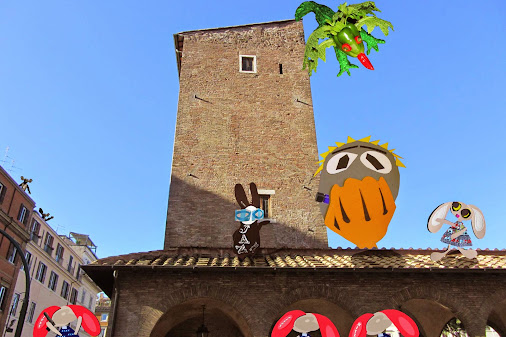 The beating of dragon wings boomed across the city and Panico looked up in horror. "Aaaaagh! A dragon. I'll be burned to a crisp and my ashes will be sucked into a street cleaner." Terni the Food Dragon plunged from the sky and circled gently above the old medieval tower. The Wabbit smiled because he had engineered this meeting. "I bring you news, Panico," called Terni. "The Agents of Rabit know of your blue vial and they would do anything to get it." "What  blue vial?" asked Panico. Terni circumnavigated Torre Argentina twice, then hovered above Panico. "The one you're hiding in your fist." The Wabbit fixed his eyes on Panico and waited. "No-one must have it!" shouted Panico. "You have it," observed Lapinette. Panico's eyes swirled. "I don't have it. I hold it only." The Wabbit knew of the Agents' voracious desire for power. "If the Agents want the vial, they have good reason." Panico trembled and the vial slipped further from his fist. "If they get the vial, they can destroy us all." The Wabbit thought until Tipsy broke the silence. "The Agents are here!" "Pretend you don't see them," suggested the Wabbit. Tipsy pushed her automatic down the front of her dress and effected a valium smile. A strange look came across the Wabbit's face - a look that Lapinette knew well. "I have an idea." Lapinette furrowed her brow. "Do you have a spare vial in your fur by any chance?" The Wabbit smirked." "I do, but it's yellow. I was taking it to the health laboratory." He fished in his fur for the vial and looked at the date. "October 2005 ... "
at December 24, 2014