10. The Wabbit and the Three Fates 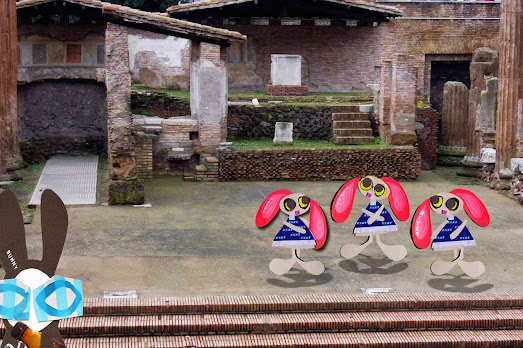 The Wabbit looked at the yellow vial and started to think. He knew he would play a trick on the Agents of Rabit, but did not know its shape. Time stood still. In the Wabbit's mind, a stage appeared - and on it stood the Three Fates. The Wabbit knew one thing. He had better wait and listen. "Hush," they said in unison. "Passes the Wabbit this way forth?" "His thoughts are here," said Mitzy. "Then he is mostly present," said Tipsy. Fitzy nodded. "He would like to control the future." "Which is more properly our job," said Mitzy. "What is the Wabbit's job?" asked Fitzy. "To think of tricks to fool his enemies," answered Tipsy. Mitzy snorted. "That's also our job." "What did you put in the yellow vial?" asked Fitzy. Tipsy giggled. "Dragon Pee." Now they all laughed together and chanted three times one after the other. "That will do the trick!" The Wabbit listened and tried hard to hold onto the image in his mind. But his brain creaked like a rusty hinge. "Did you hear that noise?" asked Mitzy. "I fear we are discovered," said Tipsy, "so let's depart the stage." "Left or right?" said Fitzy. Tipsy looked up. "I hear the beating of dragon wings!" Mitzy smiled. "Then let us exit left and watch what happens." The scene faded and the Fates were gone. The Wabbit blinked and then looked skywards because the beating of dragon wings was still there and getting louder. "Terni!" yelled the Wabbit. "I need you for something ..."
at December 26, 2014