11. The Wabbit and the Deadly Deadlock 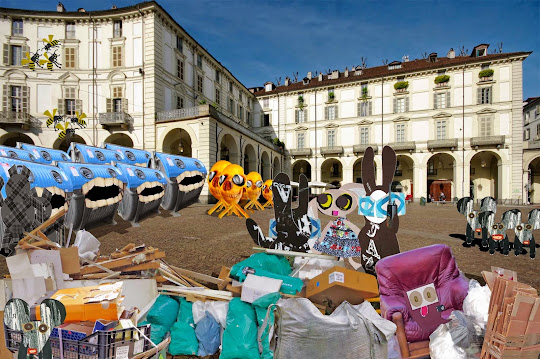 The pursuit took the Wabbit's team of enemy allies through the city - but without warning there was deadlock as they came face to face with a phalanx of Dumpsters. A mountain of trash blocked any manoeuvre and the Wabbit scowled and stamped his foot. "I should have expected the unexpected," he muttered. He watched his allies menacing the Dumpsters and it looked like stalemate. "When in doubt, call a pow-wow," suggested Lapinette. So he called a pow-wow to order. "Do you wish to approve the minutes of the last pow-wow?" asked Wabsworth. "Move next business," sighed the Wabbit. Lapinette was staring at reflections in Wabsworth glasses. "I'd like to start with Any Other Business." The Wabbit also squinted in Wabsworth's glasses. He could see shapes way up on the rooftops and he knew what they were. All of his 28 teeth flashed grimly and his voice was steel. "The business of uninvited guests?" He fished in his fur for his walkie talkie and did something he didn't want to do. Talk to the Department. He spoke rapidly, issuing instructions. "Now patch me through!" he snapped. The pause was interminable. Finally a distant voice crackled back and the Wabbit spoke. "I'm calling in a favour." Lapinette and Wabsworth leaned close. "Never a bother," said the voice, "that's grand." The Wabbit shut off the radio, looked round at his allies and waved for them to continue. Lapinette's smile was a question. "Dublin?"
at November 28, 2014