7. The Wabbit in the streets of Rome 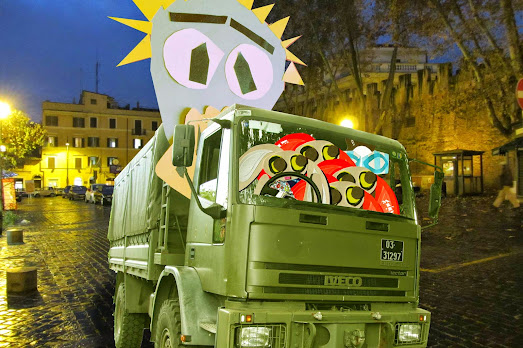 The team hurtled into Rome with Panico crammed behind the cab of the truck. Lapinette drove fast because she felt that way it would look like a Christmas float - and she swerved into Via dei Corridori with tyres screeching. In order to reassure Panico, they had wedged him in with rough bits of wood they found on the beach. Panico was hardly impressed with this safety arrangement and en route from Fregene, he reminded them at every signpost he saw. "Beware blind junction!" he had yelled. "Dangerous curve ahead!" Lapinette wound up her window and turned on the radio but REM blasted the cab with "End of the world as we know it". Lapinette wound the window down. "I prefer Panico," she muttered. "Police, police! We'll be arrested," shouted Panico. Lapinette stuck her head out. "They're only having coffee, Panico!" "I think it's just the Finance Police," offered the Wabbit. There was a noisy fumbling from the back of the cab. "I didn't keep my receipts," yelled Panico. "I'll be al fresco for years." For a while calm prevailed and all that could be heard was the hissing of wheels on wet cobbled streets. "Are we going to the Department?" asked Fitzy. "That's what the Agents of Rabit want," said the Wabbit. "I choose to disappoint them with a distraction." The truck rattled through dim neighbourhoods. "Commander Wabbit?" asked Tipsy. The Wabbit nodded. "I noticed Panico holding something in his fist." "This," grinned the Wabbit, "gets better and better."
[al fresco: in Italy this means "in prison," The closest approximation might be "in the chiller".
at December 19, 2014