11. The Wabbit, the Stone and the Ring 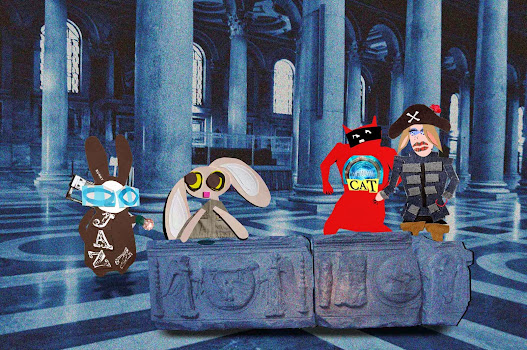 Rabbit Jenny was right. The void was an illusion and they found themselves in a marbled hall. Everything appeared clear. There was a carved stone - or was it a sarcophagus? "Is this it, Wabbit?" said Jenny, "is this what we seek?" The Wabbit shrugged. "Might be," he said. "Maybe we should open it then," said Lapinette and she tugged at the lid. "It looks heavy," said Skratch. He tried to shift it too but it wouldn't budge a millimeter. For a while they all stood and looked at it, as if it might move on its own. "What's this opening?" asked Lapinette. The Wabbit glanced at it but when he looked into the hole, he felt suddenly compelled to search in his fur. Lapinette watched him closely. "What are you looking for?" "I'll know when I find it," sighed the Wabbit and he continued searching. "I found it," he said with glee and he took out a ring. Skratch's heart flipped and he looked at Jenny - but Jenny was watching the ring and saw it flash in the dim light. "Did you see that?" she asked. "See what?" said Skratch. "The ring flashed," said Jenny. Lapinette gestured to the stone. "Put it in the opening, Wabbit." The Wabbit leaned forward, dropped the ring through the small aperture and waited. Jenny's ears fluttered. "Did you hear that?" Lapinette held up a paw for silence and put her ear to the stone. "Let me oot!" cried a voice.
at June 06, 2014