The Wabbit and the Return Splash 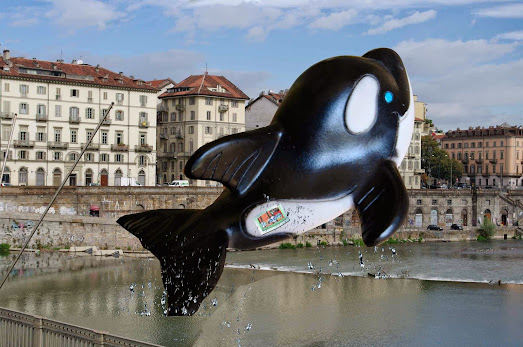 The team heard an enormous roaring and they rushed to the observation window. They were above water and airborne, but the Wabbit recognised the buildings. "We're home!" he yelled, "We're home!" Thoth's voice boomed over the tannoy. "We have arrived in Turin. Please prepare to disembark."  "Where on earth can we disembark?" asked Skratch the Cat. The Wabbit frowned. He didn't relish Thoth returning to a his rightful shape as a baboon with everyone inside. But Wabsworth was as calm as an android can be. "The Egypt Museum probably, we have to hide the stone." Now Lapinette knew this would concern the Wabbit even more and murmured in his ear. "I'm sure the Stone will be fine there for a while." "What if he wants to go around?" mused the Wabbit. "What if he goes off on a folly?" "Let him," said Lapinette, "what's the worst that could happen?" In his mind, the Wabbit caught a brief glimpse of the city struck by flame, flood, pestilence and rogue meteorites. Skratch noticed the Wabbit's distracted look and spoke calmly. "I wonder," he said. "Not a soul will expect the Stone to do his own thing." "So by not hiding," added Jenny, "he will automatically be hidden where no-one will ever look." "OK," said the Wabbit and he looked purposefully around the team for an escort. "Puma?" suggested Lapinette. "Robot?" said Wabsworth. "Duetta?" said Skratch. "I suppose it falls to me," sighed the Wabbit.
at June 23, 2014