16.The Wabbit - the Belly of the Whale 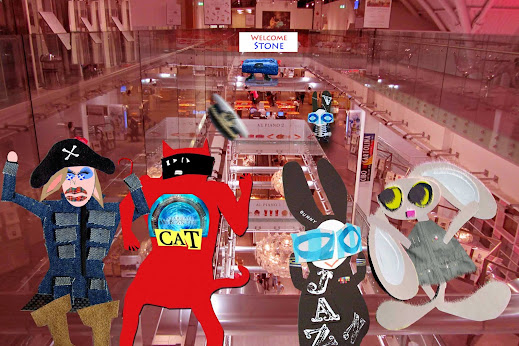 The team hopped into Thoth's mouth and slid down his whale's throat as if it was a chute. They weren't expecting a restaurant but they were delighted. The Stone took his place of honour as music started. A stately drum roll echoed in the vast hall, then a long wail of pipes swung rapidly into a reel. The Wabbit grinned mightily. He placed his feet together in a pointy fashion, sprang into the air and shouted "heuch" like a warlock. Lapinette only knew of this from books but she too flung herself upwards with joy. Jenny the Pirate was already airborne, dragging Skratch into a mad dance and singing. "Oh I've sailed in storms and I sailed through gales, but I ne'er did travel in the belly of a whale!" How they duner’d, and hooh’d, and thumped, and raved. They threw each other around until they were quite hysterical. "Oh," laughed the Wabbit, slumping. "That was awful guid." "I found my cap," said a delighted Skratch. The Wabbit turned to him but something else took his attention. "Wabsworth!" How did you get here?" Wabsworth looked up and waved. "I used another way in," he said, "it was rather interesting." Lapinette smirked as a deep voice boomed suddenly from the bowels of the whale. "Food is served in the Officers' Mess." "What's on the menu?" cried the Stone. "Seafood nibbles," boomed Thoth, "thrice fried." "Paw food!" yelled Skratch.
at June 19, 2014