12. The Wabbit and the Original Stone 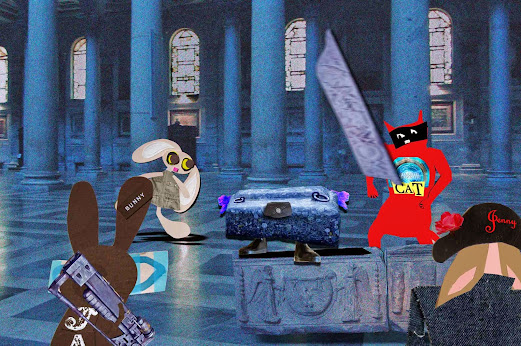 The ring dropped and air hissed. "Take cover!" shouted the Wabbit but it was too late. Rabbit Jenny neatly sidestepped and Skratch deftly flinched as the lid shot past his head. "I am the original Stone," said a Stone creature, "what took ye a' so long?" Jenny's look was a question for the Wabbit - and the Wabbit knew the answer. "We've been looking for you," he said solemnly. "We came a long way and used a lot of expensive stuff." The Stone hopped up and down with agitation. "I was in hiding!" Lapinette moved closer to inspect the stone. "Why the strange garb?" she asked. "I'm disguised," said the Stone. "They're after me." "We're here to take you to a place of safety," said Skratch suddenly. The Wabbit hadn't been expecting that, so he inclined his head towards Skratch. "I know how this plot works," shrugged Skratch. "Where will ye take me?" interrupted the Stone. The Wabbit had to think, because he had no idea. "We'll take you back to Turin," he said after deliberating for quite some while. Now the Stone thought for a long time. "What's the food like?" This time Jenny stepped in. "There are delicious Hershey's bars, wrapped in smoked salmon." "Oh aye?" asked the Stone. "And covered in mayonnaise," continued Jenny. "Oooh," said the Stone. "Then deep fried in batter," added the Wabbit. "When do we leave?" said the Stone.
at June 10, 2014