10. The Wabbit and the Void 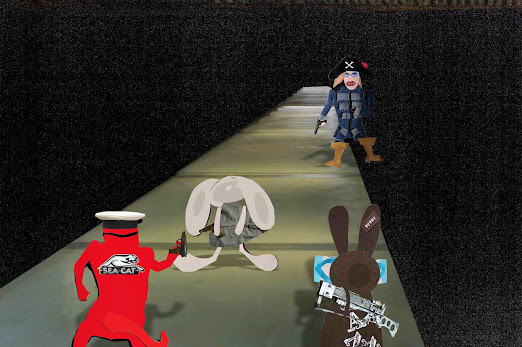 The team materialised. They were on a platform that hung in mid air over a vast chasm and there was nowhere to go. The Wabbit rummaged in his fur and drew out his lucky rock. He shook his head - then gritting his teeth, he flung it over the side. Everyone waited for a sound, but none came. Rabbit Jenny strolled up and down the platform and looking over each edge, called loudly. No echo answered. "There's only one way to go," she decided and dangled a pirate boot in the void. "Aaahgh," yelled Skratch. Jenny frowned and looked at the Wabbit. "Remind me of what we're looking for?" "I don't know exactly," said the Wabbit. Jenny looked over the edge. "Well, I can't see it." One by one everyone started to laugh. "Shhh, listen," said Lapinette. Laughing died as they listened hard. A faint echo of laughter replied from empty space. "We have to jump," said Jenny. "It's the only way." "It might be a long way down," said the Wabbit. "I don't think there is a down," answered Jenny. "I think we're in that other map you mentioned." She hopped to the far end of the platform and turned. Then without looking she leaned into nothingness. "Wha' will fill a coward's grave?" she shouted .. and she jumped. Skratch jumped after her. Lapinette bounded from the edge of the platform. "I'm not keen on heights," muttered the Wabbit and he flipped backwards into the abyss.
at June 04, 2014