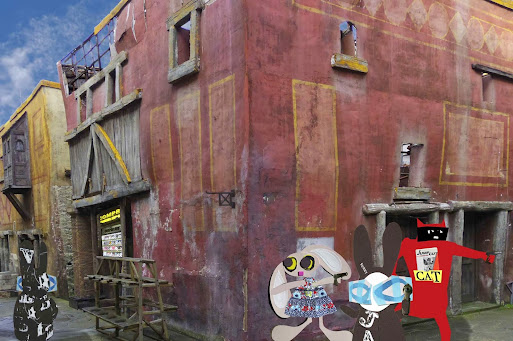 The team moved quietly through Suburra, the ancient Roman slums. Lapinette led the search for the jewellery store, because she was an expert in goldology. The Wabbit bounced on his legs and pointed his pistol in all directions. "This isn't Starsky and Hutch, Wabbit," meaowed Skratch as he covered the rear with a steady paw. Out on the open street, Wabsworth strolled nonchalantly towards a brightly light shop. "Ah! Compro Oro, just what I've been looking for!" he said loudly and he fumbled conspicuously in his fur for a fake ring. "I hate these pawn shop places," whispered Lapinette. The Wabbit heard the snick of a safety catch and he grinned broadly. "They're full of dodgy things. What do you say Skratch?" "I never used them," said Skratch who had been a cat burglar. "I preferred professionals." Wabsworth hoped closer to the entrance and raised his voice. "A whole window of shiny shiny things, how lovely." Lapinette twitched her super ears at a faint snickering. "They're behind the paper-thin walls." "We nailed them," said the Wabbit. "They're just begging for it." "Begging for what?" asked Skratch. "The old switcheroo," replied the Wabbit. "Just the thing for the New Year," laughed Lapinette. "I'd quite forgotten what day it was," said the Wabbit, "what with all the excitement." There was clang from the shop shutters and the Wabbit bared his 28 teeth. "Let's roll 'em."
at December 31, 2013