9. The Wabbit in the Wabitronic Psyche 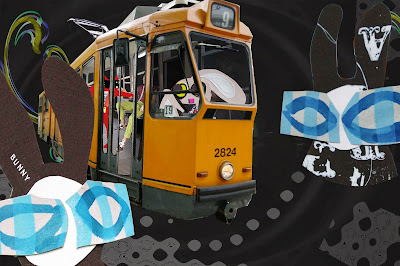 As his singing died away, the Wabbit found himself floating ethereally outside the Tram. Suddenly he caught sight of Wabsworth's disembodied head floating equally ethereally above him and he could hear his voice repeating something. "Concentrate on me, Wabbit. concentrate on me, Wabbit. Concentrate on me, Wabbit." So the Wabbit concentrated very hard indeed. "What's happening, Wabsworth?" he croaked. "You're so desperately entangled," said Wabsworth, "that I've been forced to image you inside my wabitronic psyche." The Wabbit's eyes glazed slightly but he could hear Wabsworth speaking softly. "In this space, we can begin to disentangle everything." "What about the tram?" asked the Wabbit. "I've suspended tram and passengers," said Wabsworth. The Wabbit looked at the tram and he could see everything was roughly the same. "What about the reggae creatures?" asked the Wabbit. "Especially them," said Wabsworth. "We need to embark on urgent discussions, so will you come to my wabitronic drawing room?" "I didn't know you had a drawing room," said the Wabbit in a surprised voice. "We all have a drawing room," laughed Wabsworth. "How else did we come into being?"
at December 02, 2013