10. The Wabbit in the Drawing Room 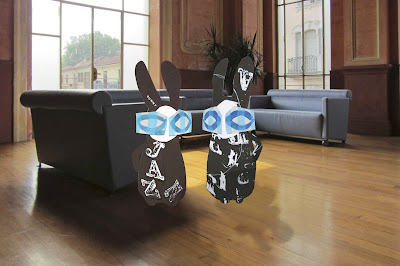 Now that he was inside Wabsworth's wabitronic psyche, the Wabbit looked all around. Then he looked at Wabsworth and thought. When the Wabbit's android double, Wabsworth came into being, he was a copy of the Wabbit. But time had passed and Wabsworth had laid down his own thoughts and ways of doing. The Wabbit knew this and he was used to it. "Nice drawing room," he said. "Most minimalist." "I've been working on your psyche," said Wabsworth, "and this is the result." The Wabbit briefly wondered where he would put his collection of scratchy old records, but he moved swiftly to the matter in paw. "What's going on?" Wabsworth stuck a paw in his fur and inclined his ears, just like the Wabbit. "Did you notice the shape of the reggae creatures from the Late Tunnel?" The Wabbit shook his head. "They're equations," said Wabsworth. The Wabbit shook his head again. "Schrödinger's equations," added Wabsworth. "You became entangled with objects important to you. But I'm afraid they're both here and not here at the same time." "We're here though, aren't we?" queried the Wabbit. "Yes and no," said Wabsworth.
at December 04, 2013