2. The Wabbit and the Signals 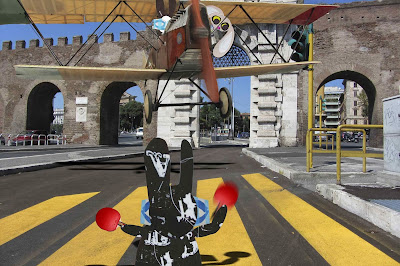 Susan the Biplane flew to Rome at lightning speed and dropped sharply to Via Sannio Market. "Down there!" yelled Lapinette. "That's our signals marshall," said the Wabbit. Susan sniffed because she felt she didn't need one. "He's saying forward and right," explained the Wabbit. "I didn't know we had a signals marshall," said Lapinette. "Oh, you never know when you might need one," said the Wabbit. Susan dipped her wings, then Lapinette shook her ears and asked, "How did Wabsworth get here so quickly?" "Turbina the Jet Car," stated the Wabbit." Now Lapinette was completely astonished, because she knew that Turbina was very picky about her drivers. "We're rather close to that bus stop," said Lapinette. "No Ma'am," murmured Susan and she landed neatly, coasting past Wabsworth to the right as indicated. The propeller died and the Wabbit hopped down. "What's the word on Robot?" "Nothing," said Wabsworth, "but there are reports of a troublesome rampaging God." "The worst kind," moaned the Wabbit. "Description?" asked Lapinette. "Tall, enormous mouth, wings, a big "M" insignia." The Wabbit's eyes glinted dangerously. "I know him."
at December 17, 2013