5. The Wabbit & Moloch on the Beach 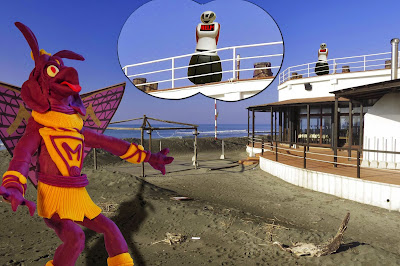 The Wabbit stood on the back of the the jeep and looked through his field binoculars. "There he is! There's Robot. " Lapinette squinted her eyes in the sun. "What does it say on his monitor?" "It says Help!" said the Wabbit with a wry grin. "Robot's always to the point," murmured Lapinette and she strained her super ears. "I can hear Moloch muttering." The Wabbit waited silently. He could hear something too but no words, so he kept quiet. "OK," said Lapinette finally. "He says he's the spectre of genius and he won't stand for interference." "Who by?" asked the Wabbit. Lapinette's eyes narrowed to a single point. "The ghastly agents who's ears are armies." The Wabbit lowered his binoculars. "The Agents of Rabit! They've been much too quiet." Lapinette's ears quivered. "What on earth did they do to annoy Moloch?" The Wabbit lifted his binoculars. "Now he's turning!" "And he's waving his arms," said Lapinette. "Now he's spotted us," said the Wabbit, "and he's coming over here." "Oh, what to do?" asked Lapinette casually. "Get in his way?" suggested the Wabbit and he shrugged. Lapinette's ears flapped in a sudden wind. "Waaaaaaaaaabits!" yelled Moloch.
at December 24, 2013