9. The Wabbit gets to Cinecittà. 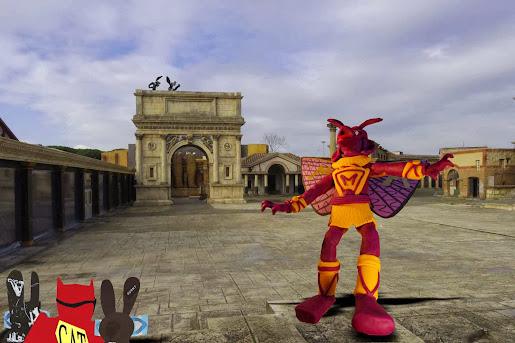 "That's torn it!" Wabsworth and Skratch jumped because the Wabbit had crept up behind them. "Sorry folks," murmured the Wabbit. "He moves fast, that Moloch god." Wabsworth pointed. "Are these seven league boots?" "That's only in fairy tales," said Skratch. "It's a fictional enormity." They put their paws over their ears as Moloch crashed a foot and gave a mighty cry that echoed across the backlot. The thin walls of the film sets shook and rattled. "Where is the Ring of Fulvius?" he roared. "Give - me - back - my - Ring!" They could only watch as Moloch stamped up and down and howled. Wabsworth nudged Skratch. "Can you see the Agents of Rabit?" Skratch narrowed his eyes. "Up there on the archway?" "Arco di Traiano," said the Wabbit archly. "All is artifice, Wabbit" remarked Skratch, "did you bring the Snazer guns?" "They're in the jeep," said the Wabbit. "I parked it over on the streets of New York." "I hope its still there," smiled Wabsworth. "So many gangs." The Wabbit grinned and waved a paw. "Let Moloch distract the Agents and we'll sneak round the back." "I wonder what happened to his ring?" mused Skratch. The Wabbit thought. "Now where would Agents hide it?" "A finger?" said Wabsworth. "Maybe," said the Wabbit, looking at a paw. Skratch's eyes glinted and he purred softly. "A jewellry shop!"
at December 30, 2013