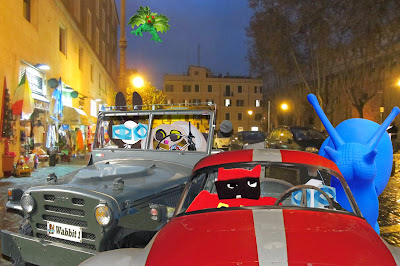 "All right everyone, look alive!" shouted the Wabbit and he made a circular motion with his paw. Lapinette spoke fiercely into her walkie talkie to Terni the Dragon. "Do you have visual?" The radio crackled. "Moloch is heading down the coast." Lapinette’s voice was brisk. "Follow him and locate Robot. Advise but do not extract." The Wabbit issued orders. "Snail, block the road to the south at Fiumicino." He looked across at Turbina the Jet Car. "Wabsworth and Skratch. Stay in contact with Terni and rendezvous at Control Point Carrot." He looked all around with narrowed eyes. "Where’s Puma?" "Just arrived at Rome Termini." replied Lapinette. The Wabbit nodded. "Tell him to change to the train for Maccarese. We’ll pick him up." Wabsworth revved Turbina’s enigine and Snail wiggled his antennae. Lapinette nudged the Wabbit. "There’s more to this Moloch business than a kidnapping." "And the rest!" said the Wabbit, "so let’s proceed cautiously. We’ll isolate Moloch and interrogate him."  "Remember, he’s a bit of a vengeful God," said Lapinette. The Wabbit stiffened. "I eat vengeful Gods for breakfast." "That explains your indigestion," smiled Lapinette and she crashed her jeep into gear and shot off down Via di Porta Angelica.
at December 23, 2013