7. Puma searches for Agents of Rabit 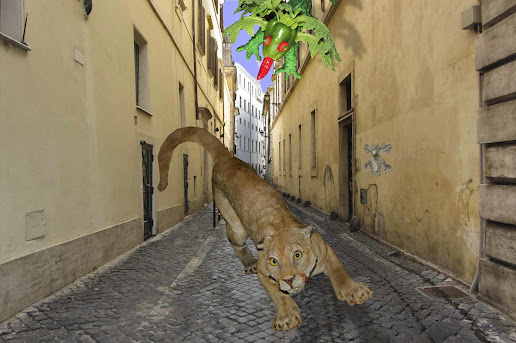 The Wabbit had given precise instructions. Now Puma and Terni searched the streets for the lair of the Agents of Rabit in a specific circular search pattern. Puma never had any trouble on the streets and usually they would empty in front of him. When anyone saw him, they assumed he had escaped from a collection of exotic creatures and if he encountered any difficulty he dispelled it with a mighty growl that shook windows. Terni the Food Dragon was regarded a little like the Loch Ness Monster and was good for tourism. People did not speak of sightings since they were disbelieved and indefinitely detained. "We're getting close, Terni," growled Puma, "can you see anything?" "I thought I spotted some waving ears," shouted Terni, "but they were dodgy Christmas decorations." "I can smell Agents," snarled Puma. "What do we do if we bump into them?" asked Terni. "Rend them limb from limb?" Puma snarled as he loped. "Leave that to the Wabbit, he has his own methods!" Terni snickered and swooped but Puma glanced to the left and spotted graffiti on the wall. He screeched to a halt. "They've been here Terni. Go and tell the Commander." "I'll be back in a trice," said Terni. "What is a trice?" asked Puma. "It's rather more than fast," replied Terni. He looped then flew vertically to the sky and vanished. "Very tricey," growled Puma.
at December 27, 2013