6. The Wabbit and the Moloch Briefing 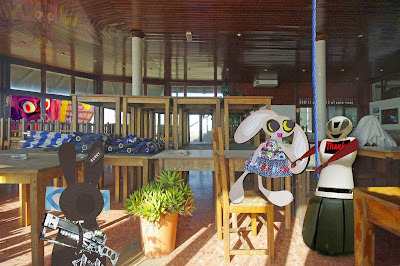 The Wabbits were marginally faster than Moloch. With lightning speed. they dived inside the abandoned restaurant and Lapinette released Robot. Moloch stopped outside and howled loudly, then peered through the window. "Oh it's you, Wabbit." "Moloch we meet again," said the Wabbit. "And I can't recall who owes who." " Wabbit there's no need for weaponry," said Moloch. "Just tell me where they are and you can all go." "Who are they?" asked the Wabbit. "The army of the ears," said Moloch, "they swindled me." The Wabbit raised an eye, hunched and swung his snazer rifle." "They took a ring entrusted to me by Fulvius. It has magical powers," continued Moloch. The Wabbit glanced at Lapinette, who knew all about rings. Lapinette nodded and explained. "The ring was given to the spy Fulvius by Croessa, Cabiria's nurse." Moloch grunted. "With the ring they can rule the known world." "Why take Robot?" asked the Wabbit. "He knows little about rings." "He knows about the army of the ears," said Moloch. Robot's gears whined. "Is this about the Lupi?" "It's not about Roma Football Club," smiled Lapinette. The Wabbit scowled. "It's about the Agents of Rabit." "Do you have a plan?" asked Lapinette. "I do," said the Wabbit. Moloch sighed. "You know where they are?" The Wabbit bared all of his 28 teeth. "I know a lot of things."
at December 26, 2013