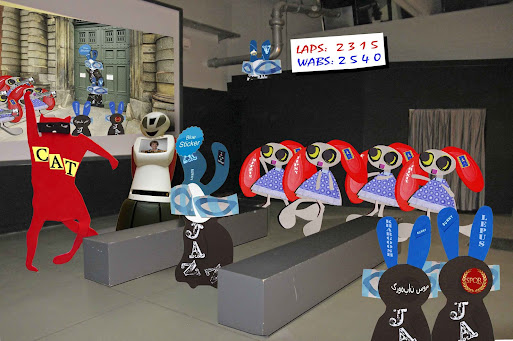 The teams gathered at the judges’ chambers for the final adjudication. The Wabbit had applied various solvents (which he kept in his fur) to the sticker - but it was still firmly glued to his ear along with some paint from the prison gates.  Skratch was the first judge to speak. "It was very close. Very close indeed." "Both teams excelled in different areas," said Robot," and I have computed the margins." "It’s obvious we won!" cried the Wabbit. "Silence in my court!" boomed a familiar television voice from Robot’s chest. "Judge Judy isn’t on the panel!" shouted the Wabbit. "I’m running a Judge Judy algorithm," said Robot firmly, "which I generated from no less than ten thousand of her judgements." "Grrr!" said the Wabbit. "The result is a draw in both sections," said Skratch. “The Wabbits excelled on innovation and trickery," said Robot. “The Lapinettes were best at cunning and rapid force," said Skratch. There was silence.  "It can’t be a draw," shouted Wabsworth from the balcony, "because I’m not doing it again!" "No need," said Robot. "Team leaders will assemble for a decider." Lapinette looked smug because she was more than confident. The Wabbit groaned. "I hope it isn’t a quiz," he muttered to himself. "The decider will be a quiz," said Robot. The Wabbit pretended to smile. "I love quizzes," he lied, "and I know a good question." Everyone turned to the Wabbit. "Why doesn’t glue stick to the inside of the can?" he asked.
at August 30, 2012