7. The Wabbit faces a Dilemma 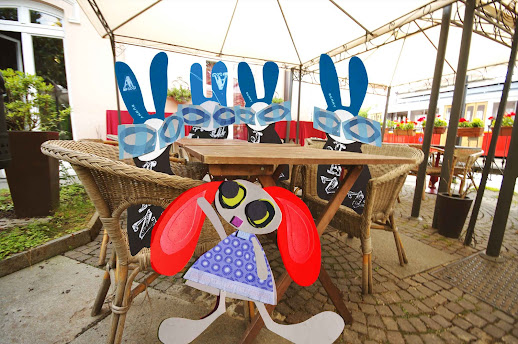 The Wabbit’s team had changed colours for the next round of the War Game and had gathered at the Caffè in Superga for a break when a red-eared Lapinette came hopping in. "You won’t win the next one!" she said. "Who can foretell the future?" smiled the Wabbit. "You cheated," said Lapinette. "All’s fair in love and war," replied the Wabbit. "Up the reds," said Lapinette and she left as quickly as she had arrived. "Up the blues," said Lepus and glanced back at Wabsworth who was talking to Khargoosh. "Up the blues," cried Wabsworth and winked. Lepus leaned forward and spoke confidentially to the Wabbit. "Could you give me Wabsworth’s phone number?" he whispered. "Why don’t you ask him yourself?" said the Wabbit  "I’m hardly his father." Then he noticed Lepus flinch.  "Oh I see," said the Wabbit immediately. "What are your exact intentions?" "I thought we might go out for an aperitivo together, then see a show," said Lepus shyly. The Wabbit wondered how to explain the situation and his eyes narrowed. "Look Lieutenant Lepus, Wabsworth isn’t at all like us wabbits." "I’m very inclusive," said Lepus. "OK," nodded the Wabbit and he had another think. "His fur isn’t natural, you know," tried the Wabbit. "I really don’t care," said Lepus. The Wabbit thought frantically. "Wabsworth has no parents," said the Wabbit. "We can always adopt some," said Lepus. This time the Wabbit gave up. “Wabsworth is an android!” he sighed. "Well, nobody’s perfect,” said Lepus.
at August 20, 2012