2. The Wabbit and the first Skirmish 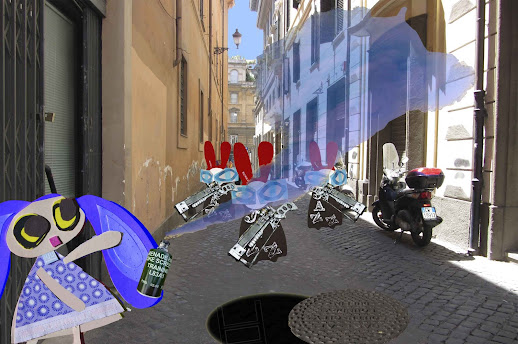 For their War Game scenario, the Wabbit drew the side of the government and Lapinette the insurgents. The Wabbit was far from pleased because he would have liked to be an insurgent. But on the bright side, he did get to wear the red ears whilst Lapinette wore the blue. On reflection, he thought his small team looked most fetching. "Let’s patrol the streets and roust the insurgents from their nests," said the Wabbit. So they set off looking in corners and behind vehicles, poking things with the barrels of their snaser guns. They were just making their way down a back street when the Wabbit caught sight of something in the road, “Careful bunnies," said the Wabbit sharply, "watch out for that open manhole." Suddenly there was a whoosh and blue smoke came spiralling from a grenade. "Take cover!" shouted the Wabbit and they all crouched against a wall, rubbing their streaming eyes. "Oh, that stings," said Sergeant Khargoosh. "Did you see anything Commander?" asked Lieutenant Lepus. "I saw a flash of blue print frock," said the Wabbit. "How many do you think there are?" said Lepus. The Wabbit grimaced.. "Where Lapinette is concerned, it only takes one." "Who are her close associates?" asked Khargoosh. "Well, me I suppose," said the Wabbit. "Then you know her better than anyone. What should we expect?" said Lepus. "The unexpected," said the Wabbit, "so come on you bunnies."  And he hopped ahead glancing right and left.
at August 14, 2012