5. The Wabbit sees Something Strange 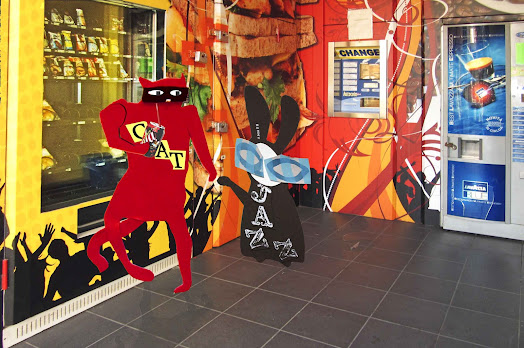 The Wabbit was deep in thought as he passed the Automatic Food Kiosk in Via Genova. But he glanced in and couldn’t believe his eyes. He found himself watching Skratch the Cat Burglar put money in a slot and lifting a can of Wabbit’s Cola from a vending machine. "Skratch, that’s Wabbit’s Cola!" he yelled. "Very nice too, I must say," said Skratch. "It’s both tangy and refreshing with a hint of something special." Skratch opened the can, took a sip and stifled a little burp. "But it’s not on sale yet!" gasped the Wabbit. "I'm trying to find the thief that's stealing my supplies." "Your Cola's a little on the pricey side," ventured Skratch. "How much?" asked the Wabbit curiously. "A euro," said Skratch with raised eyes. The Wabbit paused for a moment. There was something else. Something the Wabbit had ignored. He struggled to make the connection but something wasn't right. “I have a suspicion I might have something to do with this, Skratch," he said. "You’re stealing your own Cola!" laughed Skratch. "Maybe I have selective amnesia or been hypnotised," said the Wabbit, "but I can’t be in two places at once." Skratch hesitated because he knew the Wabbit well - and where the Wabbit was concerned, anything was possible. Skratch had a sudden thought. "What about your android double?" he asked. The Wabbit shook his head. "Wabsworth would rather switch himself off than steal Cola," he said firmly. "Well come with me and we’ll watch your supplies and see what transpires," Skratch said calmly. "But first I'll have another can of that Cola." "I'll join you," said the Wabbit, and he searched in his fur for a coin.
at August 06, 2012