10. Lapinette and the Runaway Train 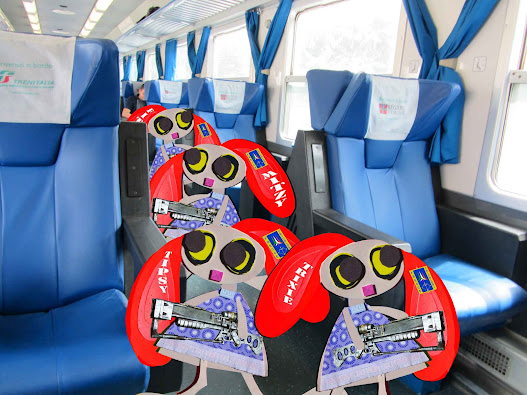 The Big Red Train was as good as his word and the Red Team found themselves misdirected and searching an empty train. They were far from pleased and kicked the seats and shouted fiercely. "Come out with your paws up!" But no one emerged. They searched every carriage but there was no sign of anyone, far less the Wabbit and his intrepid band. They were just about to give up when the train suddenly clanged and lurched, then moved at speed along the platform. Before they could collect themselves the train had sped through Lingotto, disappeared into a tunnel and burst out into open countryside  "Cavolo!" cursed Lapinette who was using her code name, Trixie. "Fiddlesticks!" said Mitzy. "Botheration!" said Tipsy. "Sugar!" said Fitzy at the rear and she stamped with vexation. "What do we do now?" asked Tipsy. "The train goes directly to Milan," said Fitzy, who had the good sense to read the signs. "That’s two hours," said Mitzy. "And two hours back," said Tipsy. “I can count!" snapped Lapinette. "We need to get off and there’s only one way to do it." Fitzy looked delighted. "Pull the communication cord!" she yelled. "I’ve always wanted to." "Then what?" asked Tipsy. "Run for it," said Lapinette, "we’ll be back in half an hour if we commandeer a car." "I’ve never done that either," said Fitzy, clapping her paws. "Don’t we need authority?" asked Mitzy. Lapinette held up her snazer gun. "I am Trixie!" she said. "I’m all the authority anyone needs."
at August 24, 2012