11. Lapinette and the Army Truck 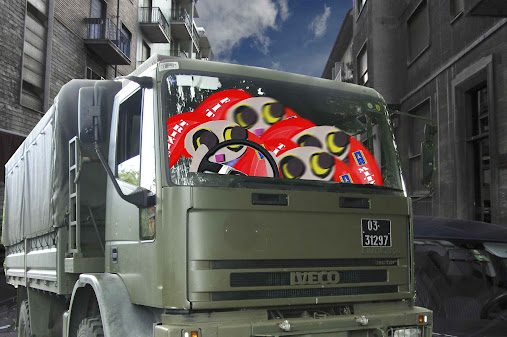 Lapinette’s Red Team was fortunate indeed. On a road just east of the railway line, they spotted a passing army truck, so Lapinette flagged it down. Frowning with much authority, she waved some very important looking papers. Then while the driver was distracted, Tipsy, Mitzy and Fitzy dived into the cab from the other side and pushed the unfortunate fellow into the street. Handing him a Metro ticket, Lapinette leapt into the driver’s seat, let the throttle out and the truck bounded forward. "Yippee!" shouted Fitzy at the rear, "Give it all you’ve got!"  "It’s a truck, Fitzy, not a Lamborghini," sighed Lapinette as she steered an unorthodox route through Lingotto and headed for the railway bridge to intercept the Wabbit’s team. "What were these important papers, Trixie?" asked Mitzy. "Carrot Club membership documents," said Lapinette. "You’re a member?" asked Tipsy. "No, but the Wabbit is," smiled Lapinette. and she swerved violently onto Via Nizza. "Did you ... steal them from him?" gasped Mitzy, her teeth chattering as they hit a section of cobbled road. "I had them in safekeeping. They were in his spare coat when I took it to the cleaners," said Lapinette calmly and she swerved left again and pushed the pedal to the metal. People leapt out of their way as the truck rumbled and clattered across the Corso Dante bridge. "Where did you learn to drive, Trixie?"  laughed Fitzy, The engine roared and the gears crashed as Lapinette drove straight through a barrier. "The Panzer Division!" she laughed.
at August 27, 2012