1. The Wabbit hears a Proposal 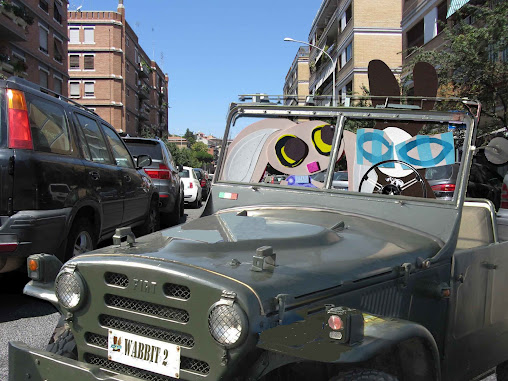 Lapinette took the opportunity of her lift to speak to the Wabbit about a plan. "Wabbit, what about a training day?" she asked and then waited to see what arguments the Wabbit would use against her idea. "What a splendid idea Lap," he said with gusto. "Perhaps I can involve my special guard, the 400 Rabbits." Lapinette was puzzled by the Wabbit’s enthusiasm but smiled nonetheless. "In that case, we can also use my own elite guard and have a War Game." The Wabbit glanced cautiously at Lapinette. He had never heard of her elite guard, but he chose not to mention it. "Of course," he said, "let’s make a week of it." Lapinette clapped her paws and pronounced it an excellent idea. The Wabbit knew he had reached the point where he could ask what this was all about. "Why at this precise juncture?" he asked. "We need to sharpen up," said Lapinette, "we need to be prepared." "Are you expecting something?" asked the Wabbit. "We must always expect the unexpected," said Lapinette. The Wabbit pondered. "I can’t disagree," he said finally, thinking about his shambolic investigation of the Drinks Thief. "But how many are in your elite guard?" "In the Game, that’s for me to know and you to find out," smiled Lapinette." I see," said the Wabbit, "so when do we start?" "No time like the present," said Lapinette. The Wabbit brought the jeep to a screeching halt. "No fraternising then," he said with a grin and he opened the door. "Lapinette hopped out then turned. "The loser pays for big eats at Eataly," she shouted. "I never think of losing," murmured the Wabbit. "It’s bad for my fur."
at August 13, 2012