3. The Wabbit takes the Lift 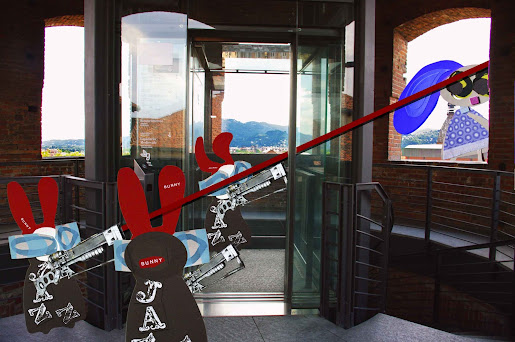 Acting on information received, the Wabbit and his confederates took a lift up the tower of an old building to flush out any War Game insurgents. They were just emerging when a flash of blue passed the open window. "It’s the Blues!" cried Khargoosh, "they’re at two o’clock." "Got her in my sights," snarled Lepus as he tilted his weapon and let fly with a beam of red training slime that smacked into the window frame near Lapinette's head. Lapinette looked over her shoulder and winked, mouthed “missed” and vanished down the outside of the building. The Wabbit stood still for a minute, gingerly feeling the fur between his ears. "That was a little close, Bunny," he murmured. "It nearly sullied my fur." "I’m a crack shot sir," said Lieutenant Lepus. "Where did you train?" asked the Wabbit. "Festa dell'Unità," said Lepus. "I always win a cuddly toy at the shooting galleries." "Keep up the good work Lepus, otherwise I’ll meet a fête worse than death," said the Wabbit, "and do mind my coat, it’s just back from the cleaners." "Right Sir," said Lepus, "now where’s she gone?" "We'll look out on the territory and see what we can see," said the Wabbit, "they're might be others." "What if they spot us, Commander?" said Khargoosh. "You said we should expect the unexpected." "Good thinking, Bunnies," said the Wabbit, "let's fold down our ears and peer over the window ledge. The three carefully folded their ears to the back and rested their jaws on the bricks. "What can you see Commander?" asked Khargoosh, "Well, I can see my house from here," said the Wabbit.
at August 15, 2012