14. The Wabbit and the Quiz Playoff 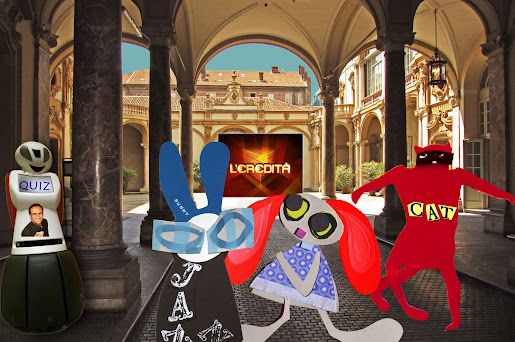 The two contestants gathered for the War Game quiz decider in the courtyard of the Department of Wabbit Affairs, and waited expectantly. "Leeeet the contest begin," drawled Skratch and threw his paws wide. "First question, Wabbit," said Robot, "what is the brightest city that be seen from outer space." "Viva La Vegas,” sang the Wabbit. "Correct," yelled Skratch. "Lapinette, if you’re in third place in a race and you overtake the Wabbit, who's in front, in which position are you?" "Second," said  Lapinette. "Correct," said Robot. "Wabbit, what’s a bad place to fall asleep?" "Concrete," said the Wabbit. "Mmmm. I’ll give you that one," said Robot. "Lapinette, what world figure once appeared in a TV show in his pyjamas?" asked Skratch. "Fidel Castro," said Lapinette quickly. "What?" gasped the Wabbit. "Invece e' vero!" said Skratch, "correct answer." The Wabbit hid a scowl and smiled sweetly but ground his teeth nonetheless.  "Level so far," said Robot, "and the first to answer the final question wins the contest." "What is 5 to the power of zero?" asked Skratch  "One!" screamed the Wabbit hysterically. Lapinette looked at him wryly because she knew the Wabbit was right and that he was the winner. "Not finished yet," said Skratch, "because in order to fully answer the question, you must say why." "Everything to the power of zero is one," explained the Wabbit. "That's only a convention," sighed Lapinette. "Sometimes being conventional pays off," said the Wabbit. "For once," smiled Lapinette sweetly, "so when's our rematch?" "In due course," grinned the Wabbit. "But first, you owe my team lunch."
[Invece e' vero: Despite what you might think, it's true.]
at September 01, 2012