5. The Wabbit and the Secret Doorway 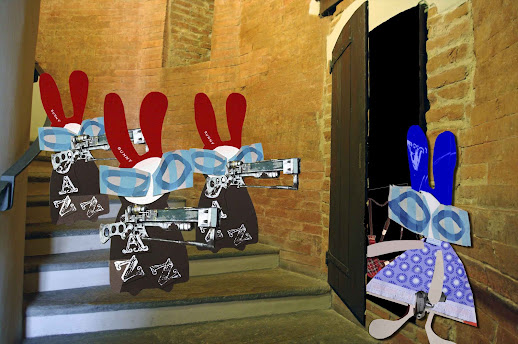 The three swept down the stairs humming a marching tune when Khargoosh heard a creaking sound. "Who goes there, friend or foe?" he shouted.  "Friendly friend," came the reply, but they all pointed their weapons at the big door as the edge of a blue print frock emerged. "Wabsworth!" cried the Wabbit. It's good to see you," "This is the Secret way out from the Secret Stairway, Commander," replied Wabsworth calmly.  "Most excellent," exclaimed the Wabbit, grinning. "I must say I like your delightful frock, Mister Spy"  commented Lieutenant Lepus, who was still pointing his snaser gun rather close to the Wabbit’s ears.  "Oh, thank you. Just something I ran up at home," said Wabsworth. "Do you have the secret weapon as specified?" asked the Wabbit. "I have one for each of you," said Wabsworth, "and I must say they’re not cheap." "I do hope you got a receipt," smiled the Wabbit. "They’re on approval," replied Wabsworth. The Wabbit looked at Wabsworth with enormous regard. "What of the enemy?" asked Khargoosh. "They’re waiting to ambush us at the Old Roman Gate," said Wabsworth. "Then that’s where we’ll surprise them," murmured the Wabbit, "how many do they think we number?" "They think there’s four hundred of us," said Wabsworth, with a glint in his eye. "Then how many do we number?" roared the Wabbit. “Four hundred!" shouted Khargoosh. "We are four hundred," yelled Lepus. "Four hundred and one," said Wabsworth and he ducked through the door. "Follow that wabbit," said the Wabbit.
at August 17, 2012