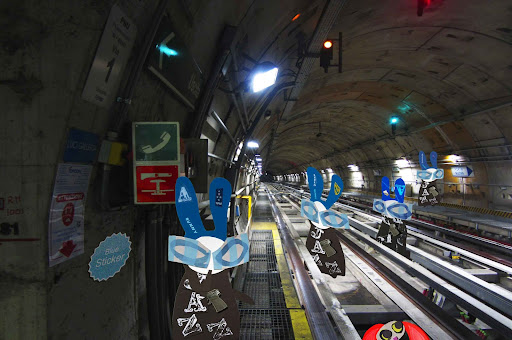 The Wabbit pressed the blue sticker in place. The Metro was one of the designated War Game targets for the insurgents and a first in the second round. The Wabbit smiled a satisfied smile but it didn’t last long. Alerted by a rustling from beneath the rails he loosened his automatic from his fur and signalled to his team.  All eyes swivelled to watch the Wabbit. "What’s up?" mouthed Lepus. The Wabbit gave a serried of paw signals. "I’ve spotted one of the enemy," he waved. Then his paw wagged up and down for absolute silence as they all inched forward. The Wabbit swept some dust across the blue sticker to dirty it up and waved for his team to back away. One by one they all backed down the tracks until they were well out of earshot. "The best defence is to stay out of range," whispered the Wabbit. "With any luck they won’t see the blue sticker and they’ll fiddle-faddle here for a while." "What is this fiddling-faddling?" asked Khargoosh. " با نگاهی به اطراف," said the Wabbit in Persian. Lepus look across the rails to Khargoosh. "Them looking around will give us time to beat them to the next target," he advised. The Wabbit grinned because knew that Lepus had served in many campaigns and had picked up this and that. Khargoosh nodded and pricked up his ears. "We should be going, I can hear a choo-choo," he smiled. "Excellent," said the Wabbit, "that’ll cover our tracks."
at August 22, 2012