3. The Wabbit teaches The Cartwheel Hop 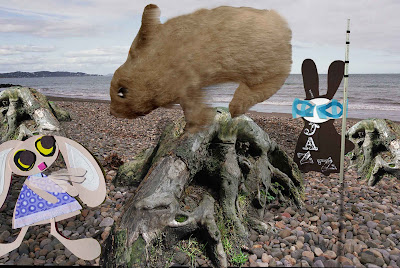 "We'll set up here," announced the Wabbit and he pulled from his fur a collapsible measuring stick. Lapinette ignored this turn of events and spoke to Lag the prehistoric wabbit. "Try a simple hop first," she said. Lag hopped up and down for a quite a while, but he always came down on the same spot. "I have an idea," said the Wabbit. "Why don't you think of a cartwheel?" "What's a cartwheel?" asked Lag. "It's a roundy-come-roundy thing that goes round," said the Wabbit. "What a good idea," said Lag. "It's all the rage," said the Wabbit, adopting an instructional stance. "When you hop to your highest Lag, try leaning with your shoulder and pitching forward." "Which shoulder?" asked Lag. "Any shoulder," replied the Wabbit. So Lag took up position and made a sudden hop. Then just when Lag was at the highest he could go, the Wabbit hopped quickly forward and poked him with his stick. "Oooh," said Lag and he pitched forward, rolled on his back and settled on his feet. He turned and looked at the Wabbit for congratulation. "Again," said the Wabbit. "No stick?" said Lag, "No stick," said the Wabbit. So Lag leapt high in the air and cartwheeled forward and wheeled round and came back again. "I'll teach everyone," said Lag. Lapinette winced and buried her head in her paws. "What about the space time continuum, now?" she said. "We invented the wheel," said the Wabbit.
at November 04, 2011