1. The Wabbit: A Wabbit of a Different Kind 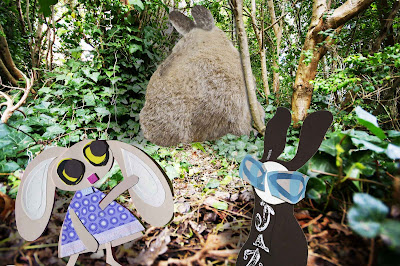 Lapinette and the Wabbit had found a park that they never knew existed and they hopped slowly through the trees to see what they could see. Suddenly the Wabbit came to a halt and his ears bent back at a strange angle. "Listen," said the Wabbit. "I can hear a crunching!" "And a munching too," said Lapinette. They crouched in the undergrowth together and looked at a creature who was clearly a wabbit. "It's a Giant Wabbit of a Different Kind,” said the Wabbit and he looked at the giant wabbit and thought. “Do you know," he said. "That's a Neuralgia Rex." "Nuralagus Rex," corrected Lapinette and she grinned. The Wabbit was shaking his head. "It may have hopped into a singularity," he said, because he had only recently been talking quantum physics with Ghost Bunny. "Nurulagus Rex doesn't hop," said Lapinette. But just as the words were out of her mouth, the giant wabbit hopped straight into the air and crashed back down on exactly the same spot. The Wabbit put a paw to his chin and sank into deep thought. Lapinette watched him think for a while, somewhat aware of a vague whirring of cogs and grinding of gears. Finally the Wabbit spoke. "Then it's the Missing Link! It's out of the past, let’s follow it." "We would be interfering with space and time," said Lapinette. "Not at all," said the Wabbit. "We’re here in this spot for a reason. You mark my words." "I'll inform the Department then," said Lapinette strictly. "Its a field decision," chortled the Wabbit. "Then there's no time like the present," said Lapinette.
at November 02, 2011