The Wabbit and the Fur of the Puma 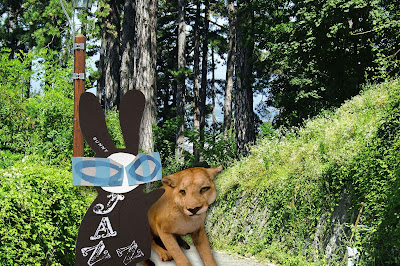 "Hello Wabbit, Are you taking a constitutional hop?" said a voice. The Wabbit was hopping along his favourite mountain path and he turned round. "Hello Puma!" he said and he stretched out a tentative paw to stroke Puma's back. "I must say, your fur is particularly sleek today," said the Wabbit. "I know, I've just had it done by a lovely little man in the Via Nizza." purred Puma. "He does Puma fur?" asked the Wabbit. "He's an equal opportunities barber," said Puma. The Wabbit wanted to laugh but he composed himself. "How do you two communicate?" he asked. "He speaks Puma, listen!" Puma made a series of long and short growls and ended with a truncated screech. "What’s that?" said the Wabbit. "Does Sir require a hot towel?" said Puma. "And did you require one?" asked the Wabbit "Definitely, it's the best bit," said Puma and he wriggled his neck and stretched. When he'd finished stretching, which took some considerable time, he sat up. "What's the deal with this camp in Rome business?" he said suddenly. "I'm arranging something,” said the Wabbit. "I hope so," said Puma. "I've already booked a tour of the Coliseum." "Puma, they're used to you here," said the Wabbit. "What will they think in Rome when you prowl down the street?” "When I prowl down the street," said Puma, "I'm in charge."