The Wabbit and the Big Flood 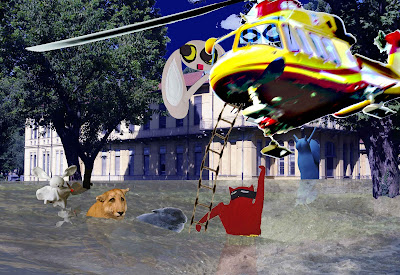 "We're over here," shouted Skratch and he waved frantically as the flood rose around him. The Wabbit’s radio crackled. "Disaster Control to Commander Wabbit. You haven't much time, so get out now!" "Not before everyone's on board," muttered the Wabbit under his breath. "Rendezvous at the Big White Hospital. Out," hissed the radio. “Copy that," said the Wabbit to himself. Lapinette threw out the ladder and Skratch grabbed the end and pulled Franco towards him. "Where's my hat?" gasped Franco. "Ghost Bunny's got it for goodness sake," said Skratch and he propelled Franco up the ladder. "What about Snail?" yelled the Wabbit. Lapinette looked across at Ghost Bunny and shouted at the top of her voice.”Tell Snail to climb to the roof, we'll pick him up there!" The sound of the torrent seized her words and mangled them, but somehow Snail heard. "On my way," he shouted. "I've ever seen a snail move that fast," shouted the Wabbit to Lapinette. With everyone on board the Wabbit lifted the helichopper over the trees and then dropped it back down on the Padiglione roof. Lapinette threw open the cargo door and Snail somehow hopped in. "I thought you liked the wet," smiled the Wabbit. "I have a limit," said Snail. "Get us out of here!" The Wabbit lifted the helichopper vertically, wheeled and flew across the city towards the Big White Hospital. “Wabbit to Control," said the Wabbit into the radio. "We're on our way. Five cosy blankets, one extra large please." "Anything else?” said a tired voice. "Seven hot refreshments," replied the Wabbit. "On a cardboard tray," said Snail.