The Wabbit and the Hospital 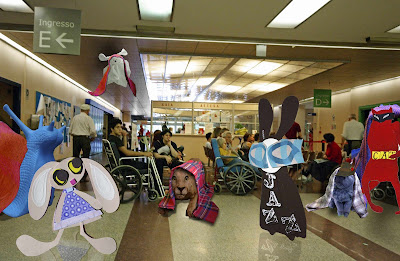 At the Big Hospital's flood relief centre, the friends were all allocated colourful rugs. Even Ghost Bunny managed to find a ghostly rug and she fluttered around with it. "What about the flood, Sir?" said Franco from under his Alpini hat. "When it abates, we will return," said the Wabbit. "We'll dry everything out and make sure you have a watertight base." "I'm concerned about the Pet Shop in Corso Svizzera," said Skratch. "All that dried food must have expanded right out into the street and stopped the traffic." Lapinette put her paw in front of her mouth to hide a smile because she knew that Skratch had some crafty supply deal with the Pet Shop. "Perhaps that wouldn't be a bad thing," said the Wabbit. "These floods might be caused by global warming." "It didn't feel very warm," said Puma who was still shivering. "It was cold and wet and horrid," said Snail, munching a cardboard tray. "I saw it coming but it was too late," said Ghost Bunny. "Suddenly the river came over the bank and ran straight at us." "Like it was alive," said Puma and he growled softly. "It's the River Dora. I think Dora means "to run"" said Lapinette. "It took a good run at us," said Snail. "Start again sir!" interrupted Franco Contadino and he pushed his hat back. "We can find you somewhere temporary, Franco," said the Wabbit reassuringly. "Rather not, Sir. Hop straight on, Sir," said Franco and he coughed a bit. "You could have done without this Franco." said the Wabbit. "You need a proper examination." "I'll get Doctor Stefano to check you out," said Lapinette and she headed for the lift. "The stairs are quicker," shouted the Wabbit.