The Wabbit and the Box of Stuff 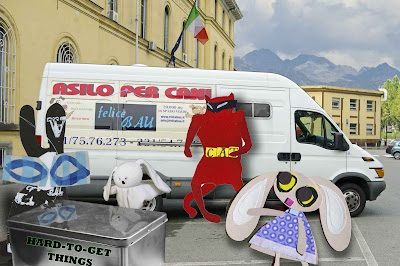 The Wabbit looked at the box of stuff and he hopped up and down. "What are you building, Ghost Bunny?" he asked. "Is everything here?" said Ghost Bunny. "And some extra bits," said Lapinette. "We managed to get a multipactor tube." "That will do nicely," said Ghost Bunny. The Wabbit was frustrated and hopped over to Skratch. "What's she building Skratch?" he asked. "My code name today, is Klaw the Cat Crook," said Skratch. "OK, OK," said the Wabbit. "What's she building, Klaw?" "Sparkle knows what she's doing," said Skratch. "Sparkle?" said the Wabbit. "Sparkle," responded Skratch. The Wabbit hopped back to the box. "Is there a truck hire charge, Klaw?" he asked loudly in an unsuccessful attempt to take charge. "I did a deal with the pet shop," said Skratch and pawed his nose. "What is Sparkle building, Lapinette? I mean Trixie," said the Wabbit. "I trust Sparkle," said Lapinette. "Whatever she's building, it's for everyone's good." Ghost Bunny looked directly at the Wabbit and winked. "Do you have a universal tool kit, Bunny?" she said. "I always have one in my fur," replied the Wabbit. "Then we won't delay," said Ghost Bunny and she fluttered upwards, adopting the manner of a quiz show host. "Shall we open the box or ...?" she yelled. "Or ...?" everyone hollered back. "Or take the money?" she shouted. Skratch nudged the Wabbit and Lapinette threw her arms in the air. "Open the Box!" they cheered.