5. The Wabbit and the Fate of the Comte 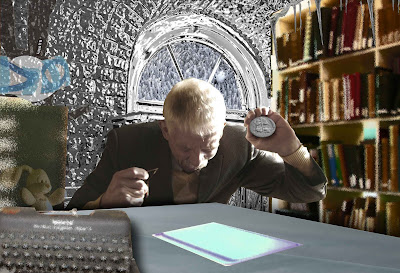 As the Wabbit faded from sight, Male de Merde felt the room grow icy until everything was frost and his very bones froze to the marrow. His limbs seized solid and in terror the Comte watched his life flash backwards before his eyes. And as he gazed raptly, images of his childhood loomed and he saw a toy wabbit that he had cherished. When one of his beloved toy's ears became detached he had beseeched his mother to sew it back. But neither of them could find the ear and Mal de Merde cast his toy aside. In the icy chill, Mal de Merde remembered how once he would go nowhere without it and and he began to weep uncontrollably. His tears streamed in continuous torrents and their warmth melted the icy grip on his hands. So with what strength he had left, he seized the Government medal awarded to him for ridding the country of so many wabbits. He took one last look at it because once he had been proud of his achievement. Then he smashed the medal against his desk with enormous force. He battered that medal time and time again until ice and wood splinters tore at his fingers. Suddenly, warmth returned to the room. Mal de Merde looked around and, listening carefully in the still, he thought he could just make out the sound of a train passing. He was nodding a grim farewell to the mysterious Wabbit, who had brought about these events, when he suddenly became aware of a throbbing in his hand. The Comte looked down. An image of a wabbit was indelibly etched on his palm.
at November 26, 2011