The Wabbit and the St Andrew's Day Mission 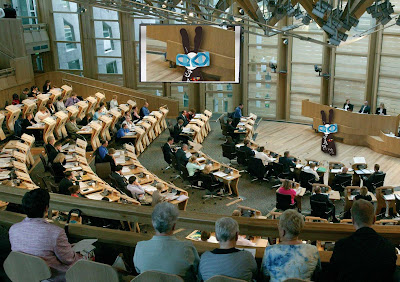 It was St Andrew's Day and the Wabbit rushed to the Parliament of his homeland to make a plea for restitution on behalf of the wabbits. "Attention Members please," said the Presiding Officer. "Attention for Commander Wabbit MacWabbit of that Ilk, who will make a formal request on behalf of the Department of Wabbit Affairs." There was a discreet murmuring from the Members. "Ahem," said the Wabbit, clearing his throat. "I'll get straight to the guts of the matter." "He speaks plainly," said one Member. "I like that" said another. The Wabbit straightened his coat and began. "My species endured a great injustice owing to the illegal introduction of the Mixoma virus here in 1953 and 95% of us were killed," he said."That was under a very different Parliament," said the Presiding Officer. "We haven't been here long." "With the greatest of respect," said the Wabbit to all the assembly, "you were part of the Government of the day and will make due amends." "What kind of amends?" said the Presiding Officer. "You will provide medicine to wipe out the virus in your land." said the Wabbit. He stared around at all the faces and spoke again. "It's my land too, and therefore I insist that measures be expedited soonest." Your proposal must pass through our Finance Committee," said the Presiding Officer. The Wabbit looked up and took from his fur a vast spiral-bound dossier full of facts and figures and names and dates. He then ruffled its many pages so much that the resulting wind caused his ears to flail. "This," he said, "will speed things up."