6. The Wabbit and the Big Clear Out 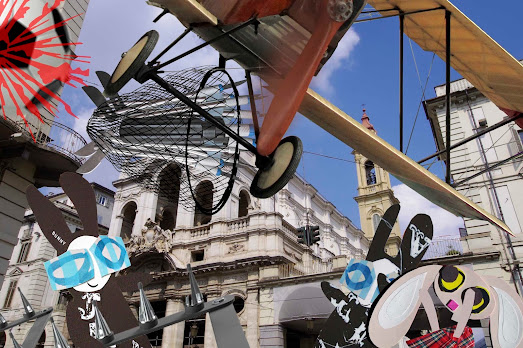 The Wabbit never felt as calm as he did now. Things flash and banged around him, but he was cool as a cucumber. Susan the Biplane dragged the sharpies of the Euclidean Faction away and the Wabbit was content to look on. Remnants of the football bomb floated in the air. He toyed with the grappling device and mused to himself. "You can't make an omelette without breaking eggs." Wabsworth smiled. "Who said that?" Lapinette chuckled. "Just about everybody." Lapinette jumped up and down and waved her paws. "Take 'em away!" They all shook their heads because no-one knew what to do with them. "Where did you get the grappler device?" asked the Wabbit. Lapinette grinned. "Local Carabiniere. I walked straight in and asked for a spike strip. They wanted to know what a pretty little lop ear rabbit like me wanted it for. I said it was a for a rough party." The Wabbit nodded and looked around. "True enough," he said. Wabsworth wanted to know where the Euclidean faction came from. "A simple mathematical dispute. You know what mathematicians are like." The Wabbit was still thinking of where to put them. "What about an asteroid belt? They can very well work out a way to get home." Wabsworth started to laugh. "They'll have to resolve into non-Euclidean space." "And back again," grinned the Wabbit. Lapinette nearly had the final word. "They have to take into account the warp factor of our jokes." But Wabsworth jumped in. "In the Orion belt that's a huge waist of Space."