6. Lapinette and the Spectre of the Eagle 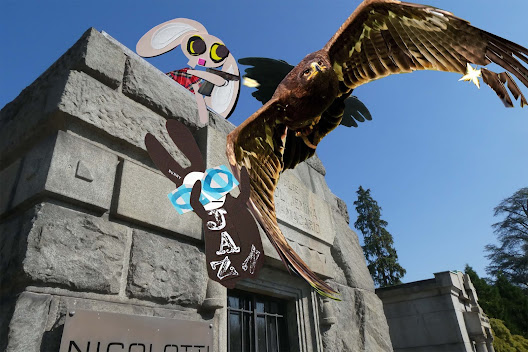 Lapinette pulled the Wabbit out and dropped him over the edge. But just as she did, the eagle took off from his statue. Fully formed he took flight from Lapinette's bullets. The Wabbit struggled to find a grip on the mausoleum, and the eagle didn't make it any easier. A giant wing almost swept him down as he batted at it with an ineffectual paw. "You can't shoot me," cried the eagle. "I'm a ghost!" All the same, a bullet clipped a wing and feathers flew as feathers do. "Take that," shouted Lapinette. "Take that and bother us no more." The eagle swooped round. "I only wanted a friend to talk to." Lapinette stood her ground. "You better choose your friends carefully and not imprison them. Be a nice friendly eagle from now on." She waved her automatic. The eagle settled on the ground and the Wabbit dropped down and strode up to him. "You were a good tour guide; you could make a euro or two." The eagle brightened. "Maybe I could." But then his face fell. "What would I do that sets me apart." Lapinette jumped down from the mausoleum. "Eagle feathers are in big demand." The eagle looked mournful. "They're illegal to possess." The Wabbit had a think. "They're ghost eagle feathers; they wouldn't last long." The eagle soared into the sky. "I'm an official tour guide then. I'll hang out by the cemetery gates." The Wabbit looked at Lapinette. Lapinette looked back and shook her head. "We have to sort everything out. It's exhausting." The Wabbit dusted off his fur. "Rewarding though." "What's our reward?" replied Lapinette. "I could use a drink," said the Wabbit. "There's an Eagle Pub," said Lapinette. The Wabbit looked at her. "It's in Pozzo Strada," she said. The Wabbit laughed. "They have everything there."
[The Eagle House Irish Pub is in Via Riete 4 (Corso Franca, Torino)]
at October 01, 2021