3. The Wabbit and Lapinette in the Cloud 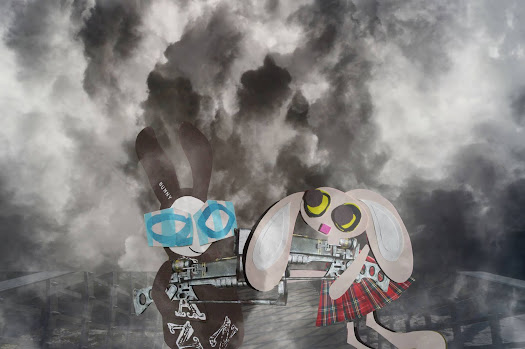 Courtesy of Hardhack Rat, the Wabbit and Lapinette hopped through the Dark Cloud. He'd got them in by some back door - no one knew of its existence. The Dark Cloud was the equivalent of the Dark Web and as such, highly dangerous. But the Wabbit wasn't taking it seriously enough for Lapinette. "Watch where you're sticking that gun," she shrieked. The Wabbit lowered his weapon, but not by much. "Sorry," he chirped. "Lower Wabbit," groaned Lapinette. "Sooahrry," said the Wabbit in a deep baritone. Lapinette ignored this and looked all around. "So this is the Dark Cloud." The Wabbit hitched the snazer higher up on his shoulder. "Looks like it." Lapinette glanced down. "What is this were standing on?" "Looks like a bridge of some kind, probably over troubled waters." Lapinette sighed. When the Wabbit was like this, nothing would change him. "Bridge to where?" "Probably a bridge too far." The Wabbit was being really annoying, and it usually meant he saw trouble ahead. Mist swirled around them and enveloped them in damp. "This plays havoc with my sinus," said the Wabbit. "Is that why you're getting up my nose?" Lapinette had had enough. Her ears twitched. Then they heard a noise, a bit like scraping. The Wabbit shrugged and they hopped on. The sound got louder. "It sounds like the hacker," said Lapinette. They stopped. She brought her snaser round and pointed it straight ahead. The clouds gave way to a screen with numbers. Toy rabbits hopped around on the screen. A blast from Lapinette's snazer saw the screen dissolve into melted plastic. "Melt down!" shouted the Wabbit.