8. The Wabbits and the Celestial Cloud 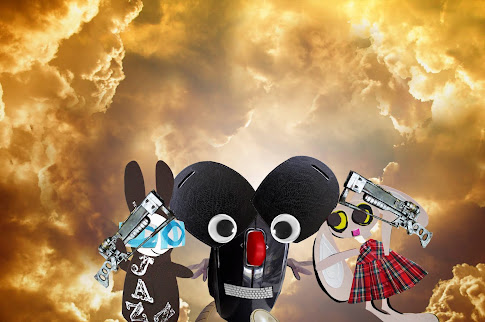 But the clouds did clear - and they became a heavenly golden colour with bursts of celestial light radiating through. Hardhack Rat was waiting for them, and he leaped forward with his paws outstretched. "This way," he shouted. He was very excited. "All our outages have stopped. Everything is back to normal." The Wabbit and Lapinette smiled and held their weapons aloft. "We saved the world then," said the Wabbit. Hardhack Rat giggled. "I wouldn't say that exactly, but it's a big improvement. Some persistent viruses disappeared too." Lapinette nodded sagely. "The cloud looks altogether better." They formed a circle and danced. The Wabbit's jig was a bit like the one he reserved for St Andrew's Night. Then he shook Hardhack by the paw. "Couldn't have done it without you." Hardhack paused for a second. "What's it like at the other end?" Lapinette was swift to answer. "It's grotty and smells of industrial garlic." Hardhack grimaced. He only liked cheese. The Wabbit put his weapon down. "It's got a lot of collapsible bridgework and a superhighway going nowhere." Hardhack chortled. "You've summed up the current situation pretty well." Lapinette dropped her weapon too. She shrugged her shoulders to ease her strained muscles. "It was all very dramatic. What do we do for an encore?" The Wabbit laughed. "This is the coda; we don't have to worry!" Hardhack Rat was ebullient. "Time for a drink and something to eat." "Let's go the Hungry Byte," said the Wabbit.