5. Lapinette and the Locked Mausoleum. 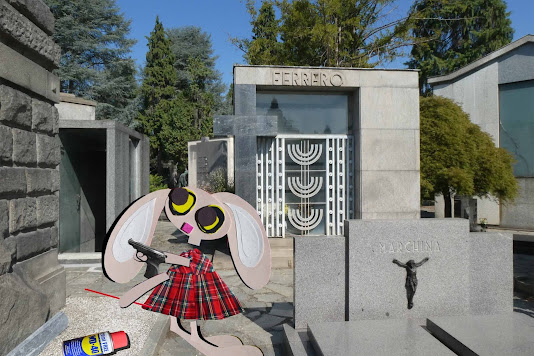 Lapinette wondered what had happened to the Wabbit. She knew his meanders could take a while. All the same, it was unusual. She meandered through the cemetery with a little more purpose. And that was when she saw it. A can of WD40 had rolled to the side of a mausoleum - and its distinctive red straw was pointing to it. She picked it up with one paw and plucked her automatic from her frock with the other. "It's a clue," she murmured. Could the Wabbit be trapped inside the mausoleum? With a great deal of care, she looked round the side and placed her ear against the wall. With that ear she could hear the dead speak. She heard the muffled sound of pacing and beating and hammering. "It sounds like the Wabbit all right." She listened a little more closely. There was a lot of swearing and the sound of things being thrown against the wall. She knocked forcefully. "Is that you Wabbit? You're always getting locked into places." There was a spluttering and she thought she heard him say "Watch out for the eagle." Lapinette thought that was odd. "Perhaps you found old coins. Is there a key?" The sweary reply indicated a key was not to be found. "Stand back then, I'm coming in," she said. She hitched up her frock and started to climb the brickwork. There were plenty of toe holds and she got to the top easily. In the roof was small skylight and she prised it back to find herself looking at the Wabbit. "What took you so long?" he said. Lapinette offered a paw. "I took the scenic route. Did you know Isa Bluette is here?" "How's she keeping?" asked the Wabbit.

[Isa Bluette was an Italian showgirl of the twenties and thirties.]