4. The Wabbit and the Cascade of Rabbits 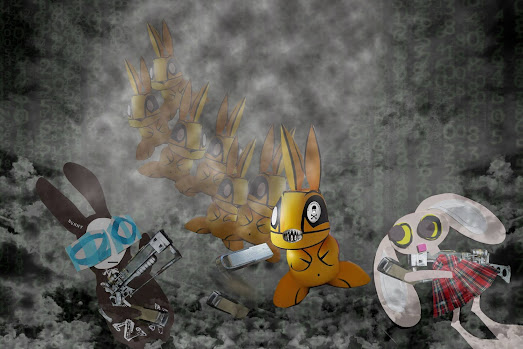 There was a cascade of toy rabbits. They were running - out of the cloud they came, one by one. They just kept pouring through. The first one bore a software piracy logo and a spectacular set of teeth. The rest looked as lethal as the first. The Wabbit lifted his snaser rifle but Lapinette shouted to him. "They're pixels Wabbit, you won't do anything with that." The Wabbit thought about it and he knew one thing. It took fire to fight fire. "That flash drive, Lapinette?" Lapinette was ahead of him. "My thoughts exactly. I think I have it somewhere in my frock." She fished around and found it. Then she threw it. With a single deft move, the Wabbit caught it and flipped it the other way round. "Take that for your trouble," he snarled. He flung it straight at the teeth of the leading toy rabbit. He had a bit of luck. The flash drive lodged between its teeth and connected. The Wabbit leaned back as the drive downloaded a powerful new virus into the toy. The toy stopped dead just like the rabbit in the souless battery advertising. So did the rest. The numbers danced but the toys lay on the ground, as lifeless as a string of dead fish. "What was on that drive, Wabbit?" Lapinette was relieved. The danger was over for now. The Wabbit grinned. "We call it digital myxoma." Lapinette grimaced. "Wabbit! You and Wabsworth have a terrible sense of humour." The Wabbit wrinkled his nose in agreement. "We're not finished. We have to get to the Hacker." The Wabbit turned to face the numbers. They were printed on a gauze curtain of poor quality. The Wabbit laughed. "Well I call that chintzy!"

[Toy rabbit by vinsky Background numbers by Jay Rue Software Piracy Badge by The Digital Artist. All at Pixabay]