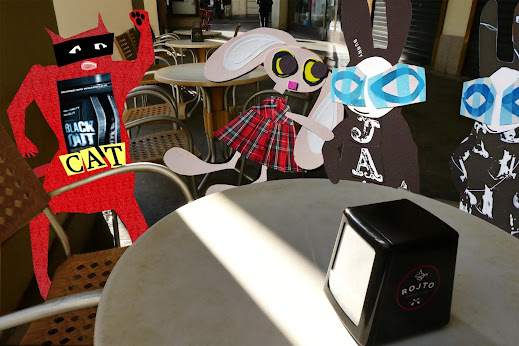 The Wabbit pointed to the table and Lapinette jumped in the air. "Are you sure about this Caffè, Wabbit? You said they gave you a Prosecco with ice in it." Wabsworth snorted in horror. The Wabbit laughed and rapped the table. "That was in the evening. This is kind of morning." Wabsworth guffawed. "The Wabbit has Prosecco on his cornflakes for breakfast, like it was milk." Lapinette raised her eyes in mirth. "That's where you've been sneaking off to, Wabbit. You said it was to collect La Stampa." The Wabbit looked a little embarrassed. "I did get La Stampa and a copy of La Settimana Enigmistica." Lapinette grinned. "Yes, I could smell it." Skratch was impatient. "That doesn't tell us what kind of Adventure you just had." Wabsworth echoed his sentiment. "So, what was that for a sort of Adventure?" Lapinette continued to bounce. "It's quite simple. Ideology, Representation and Reality." Wabsworth agreed but ventured that it wasn't enough. "The signs and codes were lacking. Usually there are conventions and you used none of them." The Wabbit intervened. "We used a simple first order symbolic substitution. That rendered our story comprehensible." Skratch laughed like crazy. "You can't get away with that, Wabbit. That's like saying it means anything I say it means." The Wabbit gritted his teeth. "Baudrillard would have it differently. All identities, social relations and social life itself are constructed through image appropriation - and that's what we did." Skratch bowed out at that point and smiled "That's all very well but where are our drinks?" Lapinette laughed. "There's a picture of them on the table."