7. The Wabbit, Lapinette & the Gooey Web 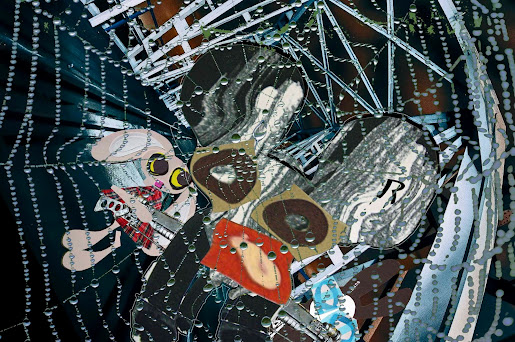 The Hacker did exactly as expected. But he wasn't expecting the Wabbit's Web. Stuck in the goo, he wriggled and writhed. But he couldn't extricate himself. The Wabbit and Lapinette lay at the ready to pump more of the web into the system - but what was there, was more than enough. "How do you like my Web, Mr Hacker?" The Wabbit was jubilant. The Hacker tore at the web but it was useless. Sticky strands held him fast. And he couldn't say a word - just gooey goo goo.  Lapinette was cautious. She expected trouble. It was a cold night in this part of the Cloud, and she thought the web might fracture. But it held fast. "What do we do now?" asked the Wabbit. Lapinette knew the Wabbit didn't think far ahead. Strictly speaking, that part of the operation fell to her. "Kin we move him?" The Wabbit grinned and pressed a button on his snazer. The web began to contract and soon the Hacker was quite a small ball. "Sombrero Galaxy?" asked Lapinette. The Wabbit agreed. "On his very own planet. He can hack to his heart's content." He rolled the ball of goo behind him and hopped along the bridge. "How do we get out of this cloud?" It was Lapinette's turn to grin. "I made notes. Take a right after the bridge." Clouds began to swirl around him and the Wabbit ploughed through them. "I suppose we just leave this entirety of the dark web behind." Lapinette sighed and shrugged. "There'll always be a dark Web." The Wabbit suggested blowing it up. "Wabbit. you can't blow up everything you don't like," she said. The Wabbit tried to dissipate the clouds by huffing on them. It didn't work. "Pity," said the Wabbit.
at October 20, 2021